All articles tagged with "Shitting"

Mistresses shit on caretaker for being dishonest

Mistress Anna and her friend mistress Jane did not want to deal with a dishonest caretaker. They had trusted him but found out that he was dishonest and they knew he had to get immediate punishment if he was to change. They wanted to deal with the issue at the earliest so that he did not continue that behavior. And their choice of punishment made sure of it. He was made to eat their poo and wash it down with pee.

This mistress did not like how her friend was always critical of her choices. She was doing well in business and he was always discouraging her from doing things and it reached a point she felt he was jealous. So she had to put an end to it. If he did not want to support her or at least offer constructive criticism, she did not want to deal with him. And she took a shit on him and made him eat it to show her she was serious about it.

Lady Lucy shits on guy for lying about her

Lady Lucy was not going to let this guy get away with lying about her. He wanted to paint a negative picture of her and she was not going to allow it. So she used her shit to make sure he learned his lesson and knew that his actions had consequences. The mistress enjoyed doing it and she made sure the punishment was worth it for her and made up for the nonsense he had said about her.

Princess Araya did not like what she had eaten from this chef and she had to make him understand how his food tasted. So she made him eat a shit hot dog. She made him take a bun and in between, it was her shit. She sat down and watched how he ate it and made sure he finished it. She did not even give him anything to wash it down with.

Mistress Gaia shits on guy for misusing her

Mistress Gaia felt that this guy was taking advantage of her and misusing her. She had to punish him and she did so as cruelly as she could. The mistress used her shit to do it and she saw to it that he ate her shit. He was also forced to undress and endure whipping and degradation. He learned not to misuse her and take advantage of her after what she did to him.

Mistress Natalia did not like how much of a sissy her slave was. She had to punish him and she did so using her shit. She also humiliated him by forcing him to wear female lingerie and also to wear makeup. The mistress degraded the guy as cruelly as she was before she let him go. He regretted being a sissy and worked not to be one so as to avoid that sort of humiliation.

Mistresses use shit to control guy

Mistress Milana and her friends wanted to control this guy and they felt that they had to use a stronger method than persuasion. The guy was not cooperating thus the need to use a stronger method to get him to cooperate. So the mistresses turned him into a human toilet and he ate their shit and was also forced to drink their urine. He realized they were not going to let him go and he cooperated.

This guy was a loudmouth and mistress Heidi does not like such people. She had to show him what she did to people like him so as to tame them. The mistress went ahead and she turned him into a human toilet. She took a shit into his mouth and he had to eat and swallow all of it. He was shocked but he learned never to be a loudmouth again.

This mistress felt that her lazy husband needed to be taught a lesson so she forced him to learn his lesson by shitting on him. He did not expect that from her but she did not care. She made sure he learned his lesson and that he would never piss her off again. The mistress also made him drink her urine and he had no choice but to do it.

This mistress was not in the mood to mess around. She wanted to make sure that she had total obedience from her girl slave so she turned her into a human toilet and she made her eat her shit. In addition to eating the shit, the mistress forced the slave to smear the shit on herself. Lastly, the mistress took a piss on the girl and had fun at her expense. 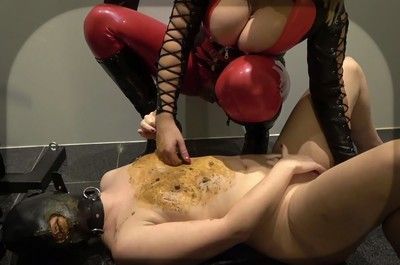