All articles tagged with "Swallow Shit"

Slave that can keep his promise

A new slave sent and application that he wants to eat all of my shit, no matter how much I would give to him. He talks big, but is his mouth as big as his words are? We'll see... I invite him to my place after I held in the shit for about four days so it became really foul and stinky. He received every millimeter of my huge sausage, and afterwards I pissed on it. But really, he chewed and swallowed everything! Now that he can keep his promise, he's allowed to wank his dick and jerkoff. 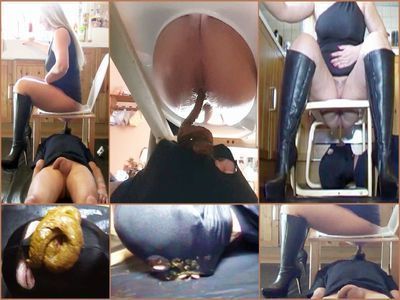 She swallows a huge sausage shit

Lesbian scat movie of premium quality! 'Cause she eats her mistresses shit really! But first she gets a warm up with her piss, which she's gonna drink. Every single drop, naturally! Then the skinny mistress spreads her legs so you can see the reall huge turd coming out of her asshole and floating directly into the mouth of her slave. She really swallows this big sausage, that's incredible.. have fun!

Giving him five piles of shit!

A toilet slave is naturally only a toilet and has no rights than eating huge piles of shit, day by day. That's his only mission! So the five female friends ignore him completely of course while they're chatting with each other - they use him only as their pile collector. Watch these five hot asses shitting the hell into his mouth! There is some really nasty footlong too, which brings him into a pretty pickle!